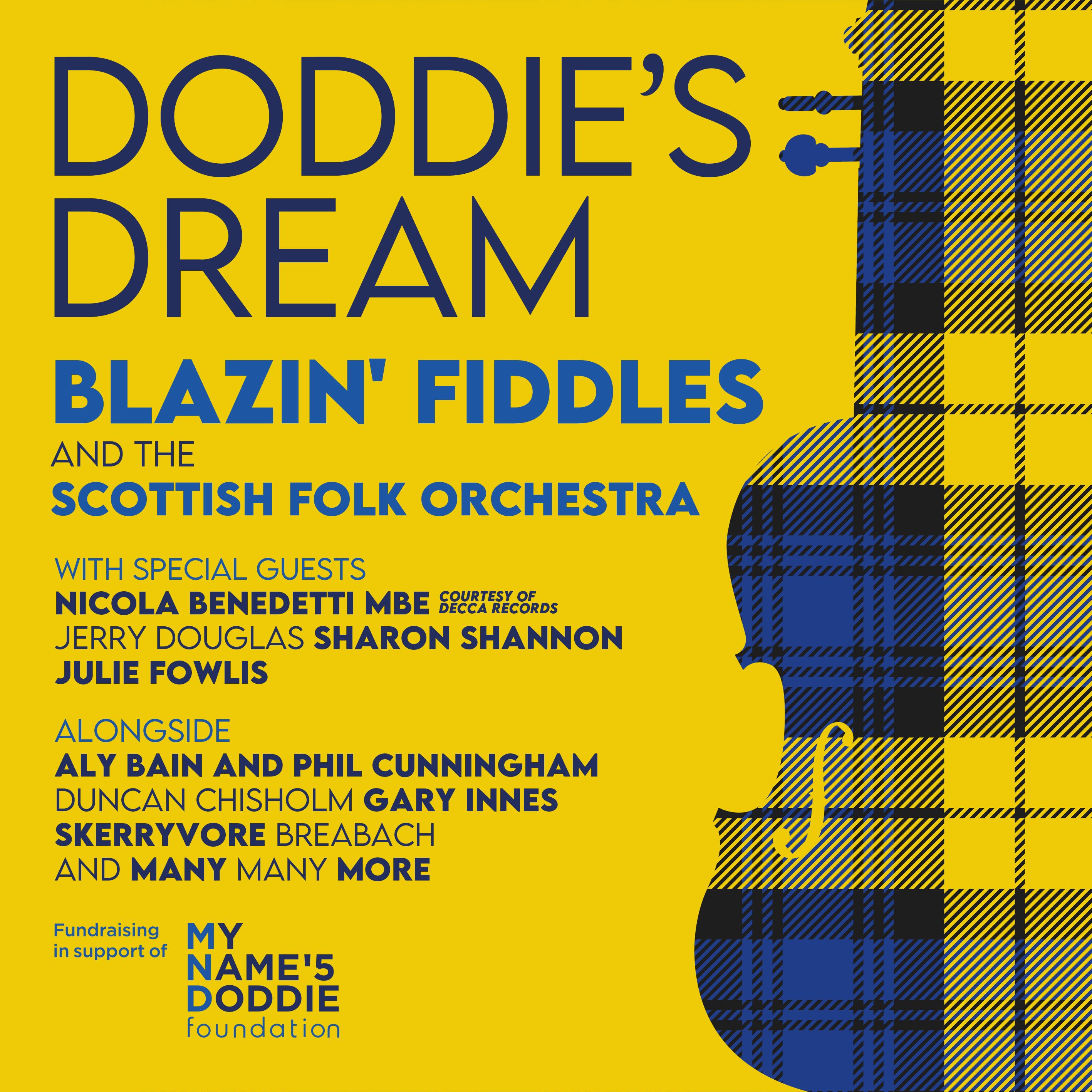 A star-studded line-up of some of the most revered musicians on the international folk scene, alongside classical violinist Nicola Benedetti, have teamed up to release a charity video and single in aid of the My Name’5 Doddie Foundation.

Set for release on Friday 12 March 2021 and featuring a host of famous faces, the track entitled ‘Doddie’s Dream’ was composed by renowned Blazin’ Fiddles member and BBC Radio Scotland broadcaster Bruce MacGregor, and recorded remotely in different locations throughout Scotland, Ireland and America.

Doddie Weir, OBE said: “What a beautiful piece of music – it really is special, and I am so humbled to think these world class and brilliantly talented musicians have all been part of this. I’d like to thank everyone involved and of course especially Bruce, he’s a better fiddler than rugby player! If ever we needed some uplifting music, it is now, and my old teammate Stewart Campbell has produced a fantastic film to accompany the music. I hope you enjoy it as much as we did!”

Whilst taking part in the challenge, Bruce MacGregor decided he would write and record a track with fellow musicians in a bid to raise more money for the charity, he said: “I was lucky enough to play a bit of rugby and even managed to squeeze into a squad with Doddie at student level. I have been so inspired by the big man’s approach to dealing with this disease, he’s incredible. So, whilst cycling out by Loch Ness last month as part of Doddie Aid, I had this idea of doing a charity single with a whole host of fellow musicians playing along with me and the Blazers. The tune has a real positive lift to it and hopefully it fits in with that amazing collective spirit that was on display during Doddie Aid in January.  All sales of the track are going to Doddie’s Charity so I hope everyone gets behind it and we can raise as much money as possible for this brilliant cause.”

Nicola Benedetti said: “It is a total honour to perform with such an incredible line up of folk musicians and for such an important cause. All the proceeds will go to Doddie’s Charity which helps fellow sufferers of Motor Neurone Disease and funds much needed research into this cruel illness. I hope everyone enjoys our wee tune and helps us to raise awareness of MND.”

The My Name’5 Doddie Foundation was launched in November 2017 by Scottish Rugby legend Doddie Weir OBE after being diagnosed with motor neurondisease. The charity strives to help fellow MND sufferers and fund research into the currently incurable disease. In January this year, the charity launched Doddie Aid which saw over 30,000 participants running, walking and cycling to rack up miles for their chosen district and ultimately raising over £1 million for the My Name’5 Doddie Foundation.

The single was recorded, mixed and mastered at Gran’s House studio by Angus Lyon & Chris Waite. The video was created by former Scotland rugby internationalist Stewart Campbell at Tigershark TV.

The track will be available to buy & download on Friday 12 March 2021 with all proceeds going to the My Name’5 Doddie Foundation.

The single is available to pre-order on iTunes and pre-save on Spotify, buyers can go to www.facebook.com/blazinfiddles for more information.

Individuals can donate directly to the foundation via the website: www.myname5doddie.co.uk